To share your memory on the wall of Thomas Grinage, sign in using one of the following options:

Print
In the early hours of May 24, 2021 Tom and his Lord walked hand in hand to heaven. He is now pulling tractors with his pulling friends who went before him.

Tom was preceded in death by his parents Edward Arthur and Barbara Jean (Kromer)... Read More
In the early hours of May 24, 2021 Tom and his Lord walked hand in hand to heaven. He is now pulling tractors with his pulling friends who went before him.

Tom was preceded in death by his parents Edward Arthur and Barbara Jean (Kromer) Grinage, his brother Michael Grinage, and his in-laws Jesse S and Ruth L (Frisbie) Larson, as well as his nephew Steve Poll.

Following with Tom's wishes, cremation has taken place and a gathering with memories and laughter will take place on what would be his 80th birthday, July 18, 2021 at their home on 5647 84th st. SE, Caledonia MI from 2pm-6pm.

The family would like to thank the doctors and nurses with Metro Health Hospital and Failth Hospice for their care, love and support given to Tom during his time there. In lieu of flowers, contributions may be made to Caledonia FFA Alumni and Friends PO Box 582, Caledonia MI 49316
Read Less

Receive notifications about information and event scheduling for Thomas

We encourage you to share your most beloved memories of Thomas here, so that the family and other loved ones can always see it. You can upload cherished photographs, or share your favorite stories, and can even comment on those shared by others.

Posted May 26, 2021 at 08:43pm
Dearest Kay and family,
Daryl and I have many fond memories of Tom. I will mention one of my favorites here. Kay and Tom came to Texas, stayed with us and participated in all the activities surrounding our eldest wedding July 18, 1992. Yes, Tom's birthday......we celebrated that too with cake and all. It was wonderful having them both with us to share the special time with our family. I cannot begin to mention all the help and support you both were to us that week. From cleaning, shopping, cutting and pealing fruit, tending flowers, chauffeuring, taking pictures, etc., and even Tom driving across Dallas after the wedding to pick up an extra set of keys to a rental car, after the keys accidently got locked in the car with the engine running. Tom was everyone's hero saving the day. To you Tom Grinage probably the most selfless man we've ever known.
Love from your forever friends,
Sandy and Daryl Barnaby
Comment Share
Share via:
RO

Posted May 26, 2021 at 08:41pm
Kay and Tony I am so sorry for your loss.Tom was a great man I always loved seeing him at Crystal Flash.
Much love to you both 😘
Ryane “Schalk” Olesnevich
Comment Share
Share via: 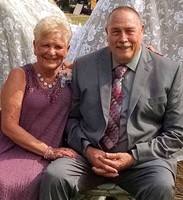