To share your memory on the wall of Theodore Mattingly, sign in using one of the following options:

Ted was born on an airbase in Big Springs, Texas to Rozanna (Weaver) Slifer and Ted Mattingly Sr. Over the years, Ted grew into a bo... Read More
On April 6, 1976, Theodore E Mattingly Jr took his first breath and on November 28, 2020 was his last.

Ted was born on an airbase in Big Springs, Texas to Rozanna (Weaver) Slifer and Ted Mattingly Sr. Over the years, Ted grew into a boy who worked hard and played harder. In January 1996, Ted decided to join the US Army as a light duty vehicle mechanic. His military service brought him all over the world, but most importantly, to Japan, where he met the love of his life, Mary. In March 2000, Ted and Mary (Otis) tied the knot and within a couple of years, they were raising two kids: Christian Keith and Alyssa Jewell.

After serving in the Army for seven years, Ted and the family landed back in Michigan where he continued his work within the diesel maintenance field. When Ted was not working, he was busy making memories with his family hunting, fishing, or building something in the barn.

In the summer of 2017, Ted was diagnosed with multiple myeloma, an incurable cancer. He fought hard for his life and for his family up until the day he returned to Jesus’ arms where he was united once again with his father, both sets of grandparents, and friends whose lives were taken too soon. Continuing on with his legacy are his wife; children; dogs larger than life; mom; sisters- Jackie Garrison, Samantha Mattingly, and Roberta Adams; several nieces and nephews; along with aunts & uncles and cousins along with an abundance of the best friends a guy could ever ask for.

A Return to Jesus party will be held in honor of Ted at Crosswind Community Church at 1683 142nd Ave, Dorr, MI at 2 pm on Sunday, December 6, 2020. To help celebrate Ted style, if able, bring your favorite Thanksgiving dish to share with others after the service along with a tool that reminds you of Ted. Social distancing guidelines will be in place and mask wearing when social distancing is not possible is highly encouraged. On Monday, December 7, 2020 at 3 pm, a military service will be held at Fort Custer National Cemetery. In lieu of flowers and in honor of Ted’s giving nature- please consider helping out a friend or stranger in need instead. And if you find yourself alone in the woods and happen to catch a glimpse of Sasquatch, don't be afraid, it's just Ted stopping by to say hi.
Read Less

Receive notifications about information and event scheduling for Theodore

We encourage you to share your most beloved memories of Theodore here, so that the family and other loved ones can always see it. You can upload cherished photographs, or share your favorite stories, and can even comment on those shared by others.

Posted Dec 06, 2020 at 01:48pm
Please accept our most heartfelt sympathies for your lossour thoughts are with you and your family during this difficult time. Love, Ludwig Family

Posted Dec 04, 2020 at 03:58pm
May your memories sustain you. My thoughts are with you in my absence. Prayers and. Love to the Mattingly family. (and to the DeLaney's)

Posted Dec 02, 2020 at 08:21pm
Dear Mary, Christian, & Alyssa, Prayers for all of you that you can rejoice knowing Ted is with our Lord & Savior! Much love, Mandy Spore & family

Flowers were purchased and a memorial tree planted for the family of Theodore Mattingly. Send Flowers 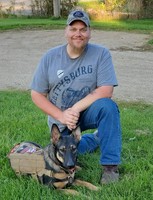