To share your memory on the wall of Steven Skinner, sign in using one of the following options:

Steve was born November 19th 1953 to J.B. and Margaret Skinner of Conway Arkansas. He was the middle of 3 boys; Jim, Steve, and William. Steve was the last remaining amongst his immediate brothers and parents. He had 3 step siblings from his mother; Willene, Robert and Lynette. Raised on Brannon’s Landing in Conway Arkansas, he and his brothers grew to be outdoorsmen and fishermen. They shared a deep bond and love for nature that spread to others who knew them. On August 25th 1972, as a young man of only 18 years, he married his first wife Nancy. They had 3 children over the course of the next 14 years; Angela, Melissa and Kevin.

Many people knew him as a “jack of all trades” and a man who would literally give you the shirt off his back. He was always willing to help everyone with any sort of repair, construction or just complete giving from his kind soul. His profession was in the Sprinkler and Pipe Fitter’s industry. He worked 26 years as a member of the National Automatic Sprinkler Industry Union. A majority of that time was with the company Masco. Steve started at entry level with Masco and worked his way up to become one of the most beloved and skilled foreman they ever had. Everyone knew him and loved to be around him.

His young life was a fast one. Many who read this will remember the Steve Skinner who worked hard, did the job right and was always able to make the impossible happen. He also made sure to party just as hard as he worked. He was no stranger to mischief and loved to prank his co-workers, friends and family. His hobbies were fishing, hunting, playing horseshoes or poker and drinking Budweiser with his buddies. He loved spending time helping people with their projects. Those were the things that filled those days of his life. Everyone knows the one thing you never saw Steve without was a Marlboro cigarette. Many often said he looked like the Marlboro man and Sam Elliot, with his thick mustache and deep voice. He was also well known for being a very accident-prone man who survived some extraordinary events and injuries in his life. Those young and fast years hold many crazy stories and memories from people who witnessed the anomaly of Steve Skinner.

In October of 1998 at the age of 45, those fast years caught up with him. He suffered 2 major strokes within 24 hours and his body was rendered heavily disabled. At this point he began the long journey of recovery. This required him to move to Michigan so he could be nursed back to health by his daughter Angela and son in law Eben Briggs. Steve fought hard in this stage of his life with the help of Angela, Eben, and the rest of his family and friends. From not being able to use one entire side of his body, he slowly but surely overcame the majority of disabilities that the stroke had caused. During those years he completely restored a 1969 Chevelle from the ground-up as part of his recovery and therapy plan.

Steve recovered quite well, but due to the intensity of the strokes he was not able to return to work. He retired and remained in Michigan with his children and developed many new friendships and hobbies. In 2006 he relocated back to Arkansas and spent the next 11 years doing the things he loved. He spent a lot of time with his beloved best friend and Brother William Skinner. He loved watching and listening to him play music with his band. He would fish in the spring and summer then hunt in the fall and part of winter. He loved hosting cookouts and fish fry’s that many people loved attending. His favorite foods were catfish, deer steak and gravy, summer sausage, sharp cheddar cheese and sweets! He sure loved his chocolate and sugar! He would travel to Michigan multiple times throughout these years and vacation with his kids. Those 11 years were also filled with many accidents of their own, but he recovered well from each one of them and continued to press on as he always did. He was pure testimony that strong will, strength and perseverance can help you overcome anything in life.

All throughout his life Steve witnessed the mercy of the Lord. People would tell him that he was like a cat with 9 lives and that the Lord was watching over him. He struggled with guilt and stubbornness and remained distant from the Lord most times. His family and friends shared the gospel with him many times throughout his life, but it was the Lord’s hand that ensured Steve would come to know the way to life in Jesus Christ.

In April 2017 Steve suffered a 3rd stroke which rendered him partially blind. He was no longer able to live completely on his own and relocated to Michigan to be cared for by his children. Only a few months later, July 3rd 2017, his brother William departed to be with the Lord from a long battle with lung cancer. Steve struggled very hard with the loss of his vision and his brother. Through God’s grace and glory he began to believe the family when everyone told him William was with the Lord. The Lord worked very hard to soften his heart during that rough time. He was being prepared to receive faith in Jesus for salvation.

July 16th 2017 Steve was born again of the Spirit when he confessed faith in Jesus Christ for the forgiveness of his sins and believed in his heart that God raised Christ from death. From that day forward, Steve began to change and show repentance and sorrow for the sins in his life. While he still struggled with the pain of his losses, he began to have hope beyond this life. From that day, and until the day he departed, he attended New Life Church in Wayland Michigan with his daughter Melissa Pennington and son in law Sam Pennington. He loved the sermons from pastor Rob Flint, and he prayed and studied the bible with his family often. The Lord’s hand was heavily guarding Steve, not only for his entire life, but particularly during his last 2 years. In his last years Steve enjoyed falling asleep while listening to the Bible and holding his cross necklace that his daughter Angela had purchased him. He trusted his soul to Jesus and knew where his hope was.

June 3rd 2019 Steve was diagnosed with terminal lung cancer that had already metastasized into his bones and blood stream. His children, grandchildren and many of his friends assisted in care throughout all his years of accidents and injuries, but Steve had a personal angel that had been assigned to him by the Lord. She was the only one he always wanted to care for him during his rough times. His daughter Angela became a guardian to him through the last 22 years of his life. When others couldn’t get the stubbornness out of him, he would listen to her. Steve lived with Angela and her husband Christopher Davey for the majority of the last 2 ½ years of his life on earth. They ensured all of his medical needs were met and with the help of his other children, grandchildren, and friends he was tenderly cared for. When Steve passed from this world to the Kingdom of Christ, he passed from the same cancer his brother William had. He also passed on the same date, but exactly 2 years apart from his brother. We joke and say they planned it that way because that’s just how strong of a bond those two brothers had. He passed in the home of Angela and Christopher and in the arms of his children and grandchildren. His final wishes were to be at home, comforted and ushered back to the Lord in their presence.

He will be greatly missed and remembered by his family, friends, and all those who were impacted by his wisdom and kindness. We take comfort knowing he firmly believed Philippians 1:21 “For to me, to live is Christ and to die is gain.”

Memorial Service for family and friends in Michigan will be Friday July 19th 2019 at 6:30pm. Service to be held at New Life Church, 160 Pine Street Wayland, Michigan 49348

Memorial Service for family and friends in Arkansas: Date to be determined.
Read Less

Receive notifications about information and event scheduling for Steven

We encourage you to share your most beloved memories of Steven here, so that the family and other loved ones can always see it. You can upload cherished photographs, or share your favorite stories, and can even comment on those shared by others. 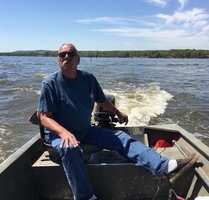