To share your memory on the wall of Steven Foster, sign in using one of the following options:

Preceded in death by his parents and sister Kathleen Foster Fletcher. Also a host of grandchildren great grandchildren as well as many other family members and numerous friends.

Services to be scheduled at a later date and time to be announced.
Read Less

Receive notifications about information and event scheduling for Steven

We encourage you to share your most beloved memories of Steven here, so that the family and other loved ones can always see it. You can upload cherished photographs, or share your favorite stories, and can even comment on those shared by others.

Posted Feb 17, 2021 at 04:19pm
May this tree be a lasting tribute to your character and good intentions. From your friends, living and past.

Posted Feb 17, 2021 at 04:07pm
During his years in the Holland Barbershop chapter (Quartet singing organization), I thought Steve was the busiest guy in Barbershop. He volunteered for, and often single-handedly managed, some of our largest chapter projects. I have a great memory of him sleeping down at the Park Theatre in Holland for a few days, managing an almost round-the-clock Singing Valentines campaign (our best ever). Sometimes it was more responsibility than one person could handle, but he had the great heart to jump in when no one else was coming forward.

Although lead was his natural part, he often wound up happily singing baritone, as he did in one of my early quartets: Black River, along with Mark Andrew and James Hall. This fun but ill-conceived quartet was made up of the last 4 guys at the party—usually doing cleanup. Sadly, we were 3 leads and a bass, so Steve and I had to be shoehorned into Bari and tenor respectively. We fought hard to make it work, even attending Harmony University in Missouri as a quartet, but eventually had to admit this dog didn’t hunt. Oh, but the stories along the way will not be forgotten; what we didn't have in quality we made up for in hilarity.

I've attached a few photos of Steve's major quartets over the years. The cowboys are "Black River", talked about above. The red-vested guys are "2 Young and 2 Old" who sang from 1993-1998. One of Steve's last quartets was "VierSangers" (we're singers) ca. 2003.

We'll always remember Steve for his 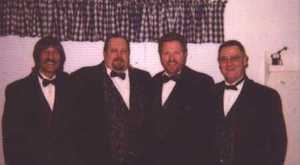 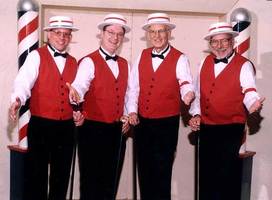 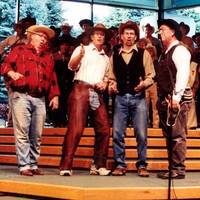