To share your memory on the wall of Robert Cleveland, sign in using one of the following options:

Bob was employed in the heating and cooling industry for more than 40 years in West Michigan and most recently was a co-owner of West Michigan Heating and Air Conditioning Services in Hudsonville, prior to his retirement.

Bob was a member of St. John's Episcopal Church in Grand Haven. Throughout his life he had a love for nature and its ability to enhance his spirituality. He enjoyed golfing, camping, hunting, fishing, birdwatching and capturing it with his photography. An avid scow sailor in his younger years at the Spring Lake Yacht Club, Bob loved sharing stories of his days sailing in the Chicago to Mackinac and Port Huron to Mackinac races. He also found great pride and joy when he was able to watch his grandchildren perform in sports and the arts.

If a memorial contribution is desired, the family asks that you consider your local Hospice.
Read Less 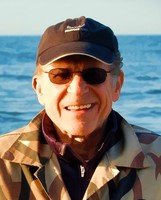