To share your memory on the wall of Richard Fernburg, sign in using one of the following options:

Print
Richard, “Dick” Fernburg, age 78, of Mason, MI was called home to be with his Lord and Savior at on Monday, September 7, 2020 after a courageous battle with heart disease.

Dick was born March, 21, 1942 in Mason to Willard and Bethel ... Read More
Richard, “Dick” Fernburg, age 78, of Mason, MI was called home to be with his Lord and Savior at on Monday, September 7, 2020 after a courageous battle with heart disease.

Dick was born March, 21, 1942 in Mason to Willard and Bethel Fernburg (Culham), where he continued to love and raise his family. Dick married Marilyn (Knapp) in 1964, and went on to have two children together.

Dick worked hard to support his family owning and operating Fernburg Excavating for 42 years. He enjoyed many seasons of hunting, fishing, horseback riding, shooting, playing cards, family vacations and simply socializing with family and friends. He later grew into the best grandpa a child could have, teaching them to fish, to shoot, to play cards, giving them a lap to climb up on, and to share ice cream with.

Dick is preceded in death by his parents Willard and Bethel Fernburg. He is survived by and will be greatly missed by his wife Marilyn; two children and their spouses Rick and Mechelle Fernburg and Debra and Tim Dansby; and three grandchildren, Abby Fernburg, Alyssa Hansen and Gage Dansby. Dick is also survived by his sisters Nancy Hause and Jill Voss, brother Wayne Fernburg, a brotherly cousin Gary Culham and many nieces and nephews.

No services are scheduled at this time.
Read Less

Receive notifications about information and event scheduling for Richard

We encourage you to share your most beloved memories of Richard here, so that the family and other loved ones can always see it. You can upload cherished photographs, or share your favorite stories, and can even comment on those shared by others.

Plant a Tree in Memory of Richard
Plant a tree 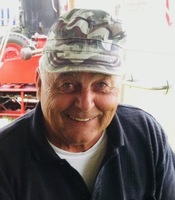