To share your memory on the wall of Raymond Mushet, sign in using one of the following options:

Ray was an only child, but he loved spending time with his cousins and extended family. Some of his fondest childhood memories were trips to Yosemite National Park. Ray lived in the Los Angeles area and in 1951 he graduated from Benjamin Franklin Senior High School. He went on to attend the University of Southern California, where he did ROTC. He graduated with a mathematics degree in 1955 and immediately went into the Navy. Raymond served for two years in the Pacific Fleet, keeping watch on the China Sea.

Ray married his sweetheart, Janet (Cooper) Mushet in 1961 and spent his entire career working for IBM. This afforded him with opportunities to move and travel, both in the U.S. and internationally. Over the years, outside of his family, he got the most joy from sharing with others about his personal relationship with Jesus Christ and supporting Christian ministries. After retiring from IBM Ray served on the board of several ministries including Church Sports International and Rusty Wright Communications. After the passing of his beloved wife, Jan, Ray moved to Michigan to be close to his daughter. He is survived by his son, Mark Mushet, and his daughter, Kristin (Mushet) Anderson, her husband, Rich, and their children Elizabeth Roberson and Bryce Anderson.

Receive notifications about information and event scheduling for Raymond

We encourage you to share your most beloved memories of Raymond here, so that the family and other loved ones can always see it. You can upload cherished photographs, or share your favorite stories, and can even comment on those shared by others.

Plant a Tree in Memory of Raymond
Plant a tree 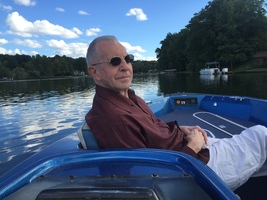