To share your memory on the wall of Paul Veenstra, sign in using one of the following options:

Paul was also an engineer for many years, but that was just his job. His passion was for ministry to his Lord Jesus Christ. He was an elder at Calvary Church, a Sunday school teacher, a prison chaplain in New York and a mentor to many. He had a heart for mission work all over the world, and traveled overseas numerous times. He and his wife have adopted four international families: Das, Saydazamov, Yuguy, Tulanbaev families.

Paul’s last ministry was writing Bible studies. The first was “Knowing God” (5 books). Next, “God and the Prophets” (5 books). Written in his late 80’s, these study guides have been used by over 4,000 Bengali students.

As Paul approached his ninetieth birthday God led him to write a study on each of the 176 verses of the longest chapter in the Bible, the 119th Psalm. He entered Heaven one stanza, 8 verses, remaining incomplete. His recently ordained grandson, Tim, volunteered to finish the studies for the remaining eight verses.

One of Paul’s favorite verses was 3 John 4, “I have no greater joy, than to hear that my children are walking in the Truth.” He was a dear husband, cherished father, loved grandpa and faithful friend. Although we will miss him desperately, we have great hope as we know he is with the Lord.

Memorial Gifts may be given to:

Receive notifications about information and event scheduling for Paul

We encourage you to share your most beloved memories of Paul here, so that the family and other loved ones can always see it. You can upload cherished photographs, or share your favorite stories, and can even comment on those shared by others. 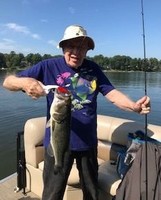