To share your memory on the wall of Norrine Green, sign in using one of the following options:

Print
Norrine Jane Green (Jones)- Entered the world on February 26th, in the year 1945 In Cassopoliss, Michigan. She transitioned and was welcomed into the Realm of Light where the Ancestors dwell, on November 3rd of the year 2020.

She was pr... Read More
Norrine Jane Green (Jones)- Entered the world on February 26th, in the year 1945 In Cassopoliss, Michigan. She transitioned and was welcomed into the Realm of Light where the Ancestors dwell, on November 3rd of the year 2020.

She was preceded on that journey by her mother and father, Daisy Mae (Vaughn) & Gerald Jones. Also her older siblings, Norman Jones, and Sherell (Sis Sue) Jones. Her younger siblings, Margaret Ann Bluitt (Jones), and Gerald (Junior) Jones. Whom undoubtedly welcomed her in with open arms. Also there, running to the front of the pack to greet his "Granny", was undoubtedly her first grandchild, William D Durr lll aka her "Poolie".

She is survived by her younger sisters Lawanna Jean Smith(Jones)of Kalamazoo, MI., and Nellie Blue of Baldwin, MI. As well as her children, Steven (Robert)Tate of Fountain, MI., Alex Tate of Grand Rapids, MI., Micheal Tate of Phoenix, AZ., William (Shawn) Durr ll of Dallas, GA., and Robert (Janine) Durr Sr of Kentwood, MI. She is loved and will be missed by a host of nieces, grandchildren, great-nieces and nephews, cousins, and countless friends and extended family.

Norrine was without a doubt a BEAUTIFUL spirit, whom always had a kind word, and a generosity beyond measure. Her home was always open to family, friends, and those seeking refuge when the rest of the world seemed to shun them. Genuinely a safe haven. As a person of divine faith, her actions spoke volumes in the way she treated her fellow man. She would literally give her last, as well as the clothes off her back to someone less fortunate than herself. A trait she was raised on, which she passed on to her children. She grew up in Cassopoliss before the family relocated to Grand Rapids. She was a graduate of Central High School, and later earned her degree from Davenport and was then offered a full academic scholarship to the University of Texas. She was a bus driver for the Grand Rapids Public School system for eight years before taking a job at Steelcase where she became a team lead and liaison before taking an early retirement after 14 years of service to the company. This was when she began to pursue her higher education and university level studies.

She relocated to the state of Texas where she lived for a number of years before returning to Grand Rapids. Once returning to spend quality time as a grandmother and mother, she again joined the workforce where she became the team lead and liaison for Leon Plastics in Wyoming, MI., until she finally retired after another 14 year stint. She then spent her retirement years in Idlewild, MI., until the time of her passing. She LOVED it up north, where her family were one of the founding families of Idlewild. She was involved in MANY community based programs, where she volunteered and spent many joyful hours amongst her fellow seniors. She was a lover of art, music, travel, nature, sports, good food, and laughter. She was EXTREMELY proud of her Native American heritage, and could often be heard saying, "My mother's blood flows just below the surface of my skin!" She instilled a great amount of pride in her family, because to her, next to the Creator, there was NOTHING more important. She will be missed more than words could EVER express or be explained.

Due to the situation with COVID the family has decided on an extremely intimate ceremony at this time, but plan to hold a huge ceremony early next year so ALL that wish to attend, pay their respects, and CELEBRATE her life with us may do so. Well wishes, condolences and E-cards may also be posted on this site as well. Any cards, donations or arrangements can be sent to 1627 Sunny Creek, Kentwood, MI. 49508.
Read Less

Receive notifications about information and event scheduling for Norrine

We encourage you to share your most beloved memories of Norrine here, so that the family and other loved ones can always see it. You can upload cherished photographs, or share your favorite stories, and can even comment on those shared by others.

Posted Nov 20, 2020 at 08:40am
I will always cherish the time I got to spend with Norrine. She was a beautiful person, inside and out. I sure am going to miss our talks twice a week. If I was having a bad morning, all I needed was to see her beautiful smile and listen to her stories. CommunityPACE will never be the same without her laughter and friendship. Rest in peace my dear friend. I know you are up in Heaven singing with Jesus and the angels. I love and miss you so much!
Comment Share
Share via:
SD

Posted Nov 13, 2020 at 10:48am
🦋 RIH to my Mother in Law. We’ve shared many stories and many laughs. You’ve always been the EAR that every daughter in law wished they had. I’m so grateful for the laughter & the words of wisdom you’ve given us all over the years. 🙏🏽
You always referred to your SONS as the top 3 and the bottom 2, well now I got em’. I’ll do my best to make sure their good and from your words exactly even if that means “keeping my foot on their neck.” 😇. You will forever be missed. We LOVE ❤️ you, we Appreciate you- until we meet again. Shawn (your daughter in-law).
Comment Share
Share via:
LW

Rest In Peace my beautiful friend. You will be missed so much at PACE. I will never forget singing old hymns with you. Loved hearing you sing! I think of you every time the sun shines through our windows in the clinic. You loved soaking up the sun drinking your coffee Karen made for you :) You were such a joy Norrine! So thankful I was able to meet you and call you my friend 😘 Can’t wait to sing with you in heaven some day ❤️ Love you Norrine! 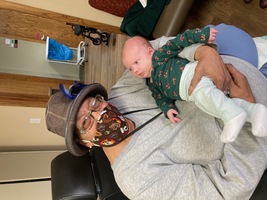 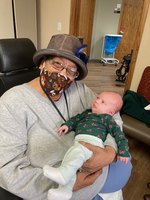