To share your memory on the wall of Leonard Standler, sign in using one of the following options:

Print
Leonard Lynn Standler, Sr 1939-2020 Leonard Standler, age 81, passed at his home Dec 27, fighting a terminal battle no one knew until his diagnosis only hours before his death. He was attended by all his loving children & grandson during that time. I... Read More
Leonard Lynn Standler, Sr 1939-2020 Leonard Standler, age 81, passed at his home Dec 27, fighting a terminal battle no one knew until his diagnosis only hours before his death. He was attended by all his loving children & grandson during that time. It is not lost on any of us that our dad was terminally ill for months and did not burden his busy children with the difficulties he had to be dealing with. It's a tribute to his love and courage as well as his ferocious tenacity. He was a man of greatness and the pride of each of us privileged to call him our father. Len was born and lived in the Detroit area. He married the love of his life, Elaine in October 1957. The riots in the 1960s brought his family to this side of state. Hastings has been his home for over 50 years. He lived many life experiences, including as a youngster an alter boy at his church in the Ferndale suburb, caring for his dying mother in his teenage years and supporting his childrens activities. He retired after many years of electric shaver sales and service. He loved cars, and he had a new one often (Much to Mom's dismay). You would always see him with a chamois or polishing cloth in his hand. His car was always pristine, and detailing it was a hobby for him. Mopar and car shows were a staple on summer weekends, as well as the annual winter trek to the Detroit Auto Show with his sons and brother. He loved the local venues of Gilmore's Car Museum, Charlton Park, and Summerfest where he was a fixture at their events with his award winning 67 Barracuda: his sons always at his side. His cars were his passion and the start up conversation that would lead to many friendships over the years. It cannot be understated that Len had a village of friends that he held close to his heart. He loved visiting his sons and daughters, dropping in and lending a hand in the project of the day. His children and grandchildren were his joy in life. He loved his morning coffee club (unless politics were the topic of discussion. LOL). Sunday football, buffing on car projects with his sons, and crafting with his daughters are just a few memories each of us will hold dear. He was a force of goodness and laughter, the perfect blend of softness of heart that comes only by hard life experiences endured. He loved his kids hard and his grandkids loud! Children loved our dad! His playfulness met them at their level, and the joy of seeing him so happy with his babies will not soon be forgotten. He cradled babies as though they were an extension of himself, and there was never an infant he could not command. He was a father of five beautiful children, and his family tree grew to 9 grandchildren with 12 great grandchildren and grand pets too. It was the sorrow of his heart to lose his loving wife Elizabeth Elaine in 2004. That hole in his soul never healed, and you could often see him rolling his wedding ring back and forth on his finger with thoughts of his Love lost. He was fierce and fun, wise and loving, selfless and sacrificing! He was our Dad, and we loved him well as he loved each of us. Len is survived by his brother Norm, many cousins and in-laws and his children: Cathy and Denny, grandsons: Brandon with his son Evan; Gabriel and Ashley with their daughter Annabelle. (He was so happy they got engaged.)
Cheryl and Tom, grandson Bailey, (Bailey Goodnight!) as well as grand pets. Lenny Jr. and Letha, granddaughter Latisha and Roy with their daughters Brittany and Caeley; granddaughter Lacey with her daughter Kianna; granddaughter Lindsey and Travis with their daughters Jordyn and Jayley. (Lenny carries the torch with Dad's prize Cuda) Paula and granddaughter Amber with her son Conner and grand pet! (Dad's second home and Charlotte will miss her Grandpa!)
Paul and Lisa, granddaughter Chelsea and Jordan, with their daughter Tahlia and their son Ryker; granddaughter Kylie with her sons Grayson and Nash, and grand pets. (Dad's summer sausages were never safe from Bentley)
To leave online condolences visit https://simplycremationservice.com/ . Services will be announced in the Spring.
Love to all of you marked by his loss. For you have been touched with the essence of a unique, beautiful human being, and none of us will ever be same without him.
Read Less

Receive notifications about information and event scheduling for Leonard

We encourage you to share your most beloved memories of Leonard here, so that the family and other loved ones can always see it. You can upload cherished photographs, or share your favorite stories, and can even comment on those shared by others.

Posted Jan 20, 2021 at 02:02pm
I have so many fond memories of Leonard. As a kid growing up I was fortunate to get to know and spend time with Leonard at my fathers business. He quickly became my buddy and I always felt a strong connection to him. His passion for cars was a common thread between us, anytime Len got a new car I was always asking for a ride. Both Leonard and Elaine were very kind to me and my family. And in turn I always considered Leonard a close family member. To this date I have so many quotes and sayings from him that I absolutely cherish. Leonard always took time to talk to me and share his views. The highlight of my year was always showing our cars at the West Michigan Mopar gathering at Hickory Corners. Len always had the same spot under the tree's and was usually accompanied by his sons Len Jr and Paul. I will surely be thinking of him this year knowing a big part will be missing in Len. We have lost a truly wonderful person, I will always miss my buddy Leonard and think of him as a close friend and family.
Comment Share
Share via:

Posted Jan 02, 2021 at 10:22am
It is with such sadness that we learned of Leonard’s passing. Family, please accept our heartfelt condolences.
For so many years Leonard was part of a group who came to the County Seat for coffee at 7am. Then when we closed the restaurant, the group found other places to meet. He was entertaining, committed to his political beliefs and a true friend. So many world and community issues were discussed and solved within this group.
Rest In Peace dear Leonard.❤️
Gary and Carla Rizor
Comment Share
Share via:

Posted Dec 30, 2020 at 07:31pm
Hi, honorary member (sometimes) of the coffee club here, my grandma is a real member. I saw Leonard and the gang at when I visited my grandma. He was always so kind and sweet. I will miss him. 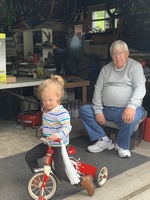 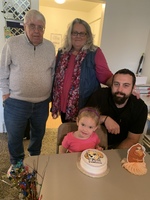 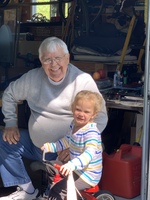