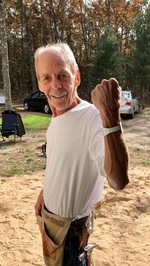 Kenneth “Ken” William Warner of Baldwin, Michigan passed away on Tuesday,
July 21, 2020, at the age of 68. After several months of declining health, Ken
passed peacefully at home with his beloved family by his side.
Born in Grand Rapids, Michigan on June 30, 1952 to father Albert Russell Warner
and mother Darlene Jean Warner, both whom have preceded him in death, Ken
was the oldest of four children. He was raised in Rockford, Michigan – a
community he sincerely loved. There, he raised his own family, self-employed as a
custom home builder for 35 years.
Ken married his high school sweetheart and the love of his life, Sue (née Bean), on
August 10, 1972. Together, they raised two daughters, Shelly Suzanne (Eric)
Bishop and Kendra Sue (Ryan) Wood, and were blessed with three beloved
grandchildren, Riley Michelle, Braedon Alan, and Evan William who were his pride
and joy.
An entrepreneur at heart, Ken went on to purchase and manage a quaint motel in
St. Ignace, Michigan for several years alongside his wife, Sue. Ken was an avid
outdoorsman who loved life in the “north country” and they enjoyed many happy
years and adventures in the small town. Recently, they purchased property and
moved to Baldwin, Michigan, where he intended to build his retirement home.
His goal was to have a lasting legacy for his wife, children, grandchildren, and
grand-dogs to enjoy. Ken became sick shortly after purchasing the property.
Unfortunately, health complications prevented him from completing his final
project despite his best efforts, and determination until the end, to do so.
Family was everything to Ken, and he spent his life dedicated to creating lasting
memories for his own. An avid car enthusiast and NASCAR fan, he loved vacations
and weekends involving visiting his favorite race tracks and super speedways. He
even got involved as a racecar owner and loved spending Saturdays with his dear
friend and team driver, Jed, at Berlin Raceway in Marne.
He loved taking family trips to Mackinac Island, as well as driving south to Florida
for many years. He enjoyed hunting, camping, father-daughter dates, helping
family and dear friends with home improvements and projects, and special
weekends spoiling his grandchildren.
In addition to his loving wife, daughters & sons-in-law, and grandchildren, Ken is
survived by his sister, Roxanne (Fred) Hula, and Brothers Mark (Sally) and Scott
(Carol) Warner. He is also lovingly survived by his sisters and brothers-in-law Jane
and Keith Fisk and Judy and Earl Thomas, who were his dearest and most
supportive confidants, along with many nieces, nephews, “bonus daughters,” and
countless other lives he has touched throughout the years.
The family wishes to extend special appreciation to Doctors Geoffrey Lam and
Justin Fanning of Spectrum Health, the medical staff at the Fred and Lena Meijer
Heart Center, the Community for the Aged & Disabled, and Dr. Christopher Barnes
and his Care Managers Tammy and Laura. Additionally, the family thanks
Spectrum Health Hospice of Grand Rapids for their devoted compassion and care
of Ken and his family over his last several days.
True to his character and simple requirements, Ken requested to forgo a formal
funeral service or visitation. The family is honoring his final wishes by holding a
private memorial and celebration of his life, to be held at a date yet determined.
In lieu of flowers, people wishing to honor Ken’s memory are urged to make a
donation in his name to Gift of Life Foundation, an organization near and dear to
the family.
Please make all donations at https://giftoflifefoundationmi.org/contribute-now/