To share your memory on the wall of Karl Cochran, sign in using one of the following options:

Receive notifications about information and event scheduling for Karl

We encourage you to share your most beloved memories of Karl here, so that the family and other loved ones can always see it. You can upload cherished photographs, or share your favorite stories, and can even comment on those shared by others.

Posted Jul 10, 2020 at 07:21am
There are so many memories I have a hard time just picking one. Karl was a second dad to me while growing up. I remember having parties at mom and dads house. Karl and dad would play horseshoes while us kids were swimming In the pool. Rides in the green station wagon, times at Scott Lake, pretending you knee was the shifter when crammed into his truck. The belt, his kid or not, you were out of line, you got the belt. Fun times at Dan and Velma’s. Karl, dad , and grandpa drinking til they got sick(😆). I’m going to miss the big galoot. Rest easy Karl, til we meet again. Love you and to the rest of the family. Thinking of all. Carie Hammond
Comment Share
Share via: 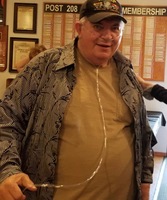