To share your memory on the wall of John Lockwood, sign in using one of the following options:

He joined the faculty of Michigan State University where he worked his entire career. His
research focused on soil-based agricultural diseases, with an emphasis on peas and
soybeans. He taught a graduate course on plant diseases for several years. He authored
many research articles, and served as a consultant to Brazilian agricultural interests. He
served his professional society, The American Phytopathological Society in many capacities,
starting as member and chair of various committees and culminating as President. He
enjoyed two sabbatical leaves, one in Cambridge, England, and another in Baarn, The
Netherlands. In 1990 he was awarded Distinguished Faculty in the College of Natural
Science at Michigan State University.

John married Jean Springborg, and their children, James Lockwood and Laura Lockwood,
and his daughter-in-law, Adele Lockwood, survive him. John and his wife Jean passed away
just two days apart. John and Jean enjoyed travel, dancing, tennis, concerts at Michigan
State University, and other cultural activities for many years. He also enjoyed refinishing
furniture, and fishing with his son, Jim. John and Jean were active members of Okemos
Community Church for over 50 years.

Jean and John moved to Grand Rapids in 2010 and were able to enjoy many of the special
features of West Michigan.

Due to COVID-19 restrictions, a private celebration of life will be held.

The family suggests that those who wish to express sympathy in the form of a donation
consider giving to their favorite charity, or making a gift to Frederik Meijer Garden &
Sculpture Park.
Read Less

Receive notifications about information and event scheduling for John

We encourage you to share your most beloved memories of John here, so that the family and other loved ones can always see it. You can upload cherished photographs, or share your favorite stories, and can even comment on those shared by others.

Plant a Tree in Memory of John
Plant a tree 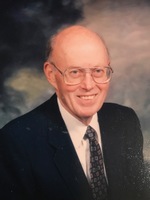