To share your memory on the wall of Helen Baille, sign in using one of the following options:

She modeled grace, goodness, and a lifelong ability to make friends wherever she went, prompting a dear friend to observe, “Wherever Helen goes, she leaves a trail of p... Read More
Helen Baille passed away in Grand Rapids, Michigan on April 14.

She modeled grace, goodness, and a lifelong ability to make friends wherever she went, prompting a dear friend to observe, “Wherever Helen goes, she leaves a trail of people who think she’s wonderful.”

In Helen’s early years, her family moved often, and her trail took her from Michigan to Iowa to Missouri to Pennsylvania. Having skipped two grades along the way, she entered Dickinson College in Carlisle, Pennsylvania at age 16 with a full academic scholarship.

When asked not long ago what she would do if she could relive a day in her life, Helen reflected before replying: “I would go back to Dickinson and thank Mrs. Taintor, my French professor, for setting what turned out to be the course of my life.”

Indeed, Helen’s excellence in French studies (with a minor in chemistry) led to a fellowship to study in Grenoble, France.

Before the 20-year-old boarded the ship for overseas, her mother offered advice that Helen followed throughout her years: “Life will be different there. Don’t compare. Learn all you can and appreciate everything as it is.”

Meanwhile, Helen’s father teased, “Whatever you do, don’t bring home a French husband.”

Helen met Michel Baille over a card table in the student union. They shared a passion for bridge, the sublime pleasures of French cuisine, and a strong sense of family, she being the eldest of six children, and he of eight.

When Helen returned to the States at the end of the academic year, she and Michel planned their future together through correspondence (as international flights and phone calls were out of the question in those days). During their three-year, letter-writing courtship, she also delighted in her job at Wyeth Laboratories in Philadelphia, where she translated scientific papers from French to English.

And it was Helen’s father, on a business trip to Europe, who would serve as the courier for the engagement ring that Michel bequeathed to Helen.

The couple’s reunion in November 1954 became the stuff of family lore. While Helen had known that her fiancé would arrive some day, she didn’t know when, and when she returned from work to find him at her apartment, she exclaimed, “Michel,” and fainted in his arms.

They joined their lives in marriage in February 1955 in Haycock Run, Pennsylvania, and settled in West Grove, where Michel furthered his career as a horseman. Together, they socialized with family and friends, attended weekly mass, and welcomed children Audrey, Jacques, Philip, and Daphne before moving to Michigan, where their last child, Christina, was born.

In 1970, Michel started his own business breaking and training thoroughbred racehorses in Grand Blanc, Michigan. On Prepwin Farm, Helen’s creative talents showed in their home décor, refinished furniture, Singer-sewn clothing, tended gardens, and French patés and desserts that still elicit “mmmms” in her grown children. From Saturday night card games to memorable travels in the U.S. and France, Helen was a calming force in a bustling family.

Once retired, Helen and Michel split their time between Charleston, South Carolina and the Jura region of France, always enjoying the discovery of new places, dinners with relatives, and, as throughout their 58 years of marriage, a good game of bridge.

After Michel passed in 2013, Helen moved to Grand Rapids to be closer to her daughters, and at 84, she once again started anew with courage and optimism, always believing in making the best of any situation. And indeed she did, developing deep friendships and, to her surprise, a bond with a cat, Gigi, who became her sweet companion. There wasn’t a pet that didn’t know Helen’s gentle spirit.

Helen was whip-smart, answering Jeopardy questions to her final days. She lived modestly, dressed elegantly, and thought pragmatically. In recent years, her greatest joys came in seeing her grandchildren and in knowing that her children’s connections with both French and American relatives would endure. With her generosity and empathy, she left a trail of people who not only think she’s wonderful, but who will miss her terribly.

Helen was preceded in death by her husband Michel Baille, her brothers Jim Benson and Bob Benson, and many other loved ones who joyfully awaited her at the gates of heaven. Her spirit carries on in all those whose lives she touched, including her sister Jean Wilford, brothers Allen Benson (Melody) and David Benson (Nancy), children Audrey Baille Gaia-Paix, Jacques Baille (Lisa), Philip Baille, Daphne Baille, and Christina Warren (David); grandchildren Jacob, James, Nathan, Bryson, and Keliana; and many relatives and friends in the U.S. and Europe.

A funeral mass will take place at the Cathedral of Saint Andrew, 215 Sheldon Blvd. SE, Grand Rapids, Michigan on Friday, May 21 at 2:30 PM, with family receiving friends and relatives beginning at 1:30 PM. Private interment will be in France.

In lieu of flowers, memorial donations would be welcomed by Hospice of Michigan or St. Vincent DePaul. Additionally, the family extends deep thanks to the Village of Heather Hills and Hospice of Michigan, both of which offered abundant support and respectful space as Helen traveled through her final days.
Read Less

Receive notifications about information and event scheduling for Helen

We encourage you to share your most beloved memories of Helen here, so that the family and other loved ones can always see it. You can upload cherished photographs, or share your favorite stories, and can even comment on those shared by others.

Posted Apr 21, 2021 at 03:30am
In fond memory of a beautiful person we were fortunate to know. From all the cousins in Birmingham U.K

3 trees were planted in the memory of Helen Baille 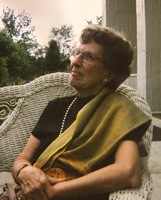