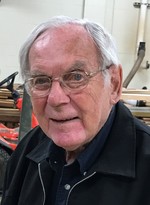 Harry was born in 1927 son of Marcus and Martina Boersma of Moline MI. Before graduating from Grand Rapids Christian School he joined the navy at 17 to fight in World War II. When he returned he worked with his dad and brothers in their business as a builder and eventually settled into a career as a woodworker.

Harold was from a large family of 13 and he enjoyed his 10 siblings, 6 brothers and 4 sisters. He is preceded in death by his brothers Bill, Henry, Ralph and Mart Boersma and brothers- in-law Jack Elenbaas, Dave Harper and Len Steensma; sisters-in-law Kay Boersma, Marge Boersma, and Barb Boersma. He is survived by brothers Bert Boersma and Ben (Cleo) Boersma; and his sisters Eleanor Elenbaas, Bertha Steensma, Anne (Ron) Ezinga and sisters-in-law Loekie Boersma and Ann Boersma.

He was a long time active member of Twelfth St CRC but spent his final years as a member of West End CRC.

Those wishing to offer an expression of sympathy are encouraged to make a memorial contribution to Edison Christian Life Center; or to Kuyper College.