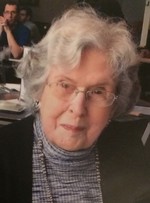 Hannah Anderson Moore, age 95, beloved mother, grandmother, and great-grandmother, passed away peacefully on August 15th, at Boulder Creek Assisted Living. She was born on December 22nd, 1923 in Halifax, VA., where she lived until 1942. She became a secretary for the Department of Defense and was assigned to work at Ft. Eustis, Va. It was there that she met Lt. Clayton Moore, whom she married in September of 1944. He left for Europe in December of 1944, where he participated in the Battle of the Bulge. She did not see him again until March of 1946. Upon his return from WWII, they began a 30-year career in the Army. Hannah and Clayton, with their only child, Roberta, lived at many Army posts during those 30 years. Posts in Colorado, Georgia, Panama, Kansas, Virginia, Pennsylvania, and the exciting and interesting post in Berlin, Germany during the building of the Berlin Wall and the years of the Cold War. They retired to Arlington, Va, in 1973. After her husbands death in 1981, Hannah remained in Arlington. She moved to the Grand Rapids area in 2010 at the age of 86.

Hannah had several passions in her life. Her greatest passion was attending her great-grandchildren's sporting events - watching Ryan play basketball at Hope College and cheering Rachel on at Rockford High School girl's swimming and diving team and the girl's water polo team. She was an avid fan! She was passionate about playing bridge. She played at Forest Hills Sr. Center, Clark Retirement Home and East Congregational Church. She loved her bridge partners and her many bridge friends. Hannah was passionate about her religion- she was a very active member of the Ft. Myer Post Chapel in Arlington where she did volunteer work. She also did volunteer work for Hospice of Northern Virginia. She was a member of the Bissell Guild at Blodgett Hospital here in Grand Rapids. Hannah had lived in Boulder Creek Asst Living for the past 8 months where she had wonderful care partners whom she loved. In her last two weeks of life, she was under the care of Faith Hospice at Boulder Creek. Hannah's family is forever grateful for the love and compassion of the caregivers, family, and friends, shown to Hannah and to them, throughout Hannah's short illness.

Hannah will be lovingly remembered by her daughter, Roberta and husband Craig Kuntz; her granddaughter Kristen and husband Andy Gamm; her great grandchildren, Ryan and Rachel Gamm. She is survived by niece Emmy and John Bass; nephew Jim and Ellen Hudson; nephew Frank and Diann Riepen; nephew Robert and Iva Riepen; and nieces Diane Riepen and Carol Ann Hahn.