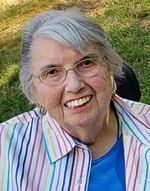 Gertrude Ann Lozon (Salamasick, Shattuck, Lockwood), passed away quietly January 7, 2021 at the age of 91 after a life well-lived. She is loved and admired by many and will be dearly missed.

Gertrude was born July 27, 1929 to Ferd and Emma (Dhaenens) Lockwood and grew up near Galesburg, Michigan. She moved to Marine City, Michigan with her first husband and spent most of her adult life in the immediate area, where she had several close friends. She was married to and widowed by three wonderful men. She raised four boys from two marriages and had the joy of seeing each of them raise families of their own. She taught first grade at area schools for many years and had a long and happy retirement with her third husband. She spent the last few years of her life in Spring Lake, Michigan, near two of her sons.

Due to the current pandemic and in accordance with her final wishes, there will be no formal memorial service beyond separate gatherings of immediate family. However, those who knew her are encouraged to take a moment to share a smile and a laugh in her memory.