To share your memory on the wall of Edward Wilson, sign in using one of the following options:

Print
Edward “Chris” Wilson, age 68, of Rockford, Michigan, went home to be with his Savior on June 13, 2020, as a result of complications related to his courageous battle with liver cancer.

Chris was born to Edward Parker and Beulah Wils... Read More
Edward “Chris” Wilson, age 68, of Rockford, Michigan, went home to be with his Savior on June 13, 2020, as a result of complications related to his courageous battle with liver cancer.

Chris was born to Edward Parker and Beulah Wilson in 1951, in Greenfield, Ohio. He was a beloved brother to four sisters: Joanne Walker, Sandra O’Dell, Judith Moore and Tonita Harsch. He met the love of his life, Sandra Roach, when they were still in high school in Tawas City, Michigan. They were married when they were both students at Central Michigan University. Chris received his Bachelor’s degree in Business Administration in 1975, and went on to have a long and successful career as a construction cost estimator. Chris and Sandy were married for 45 years and had two sons, Christopher and Matthew, whom they raised in Rockford, Michigan. In his final days, Chris was cared for by his wife and two sons, until he passed peacefully in his home, free of pain at last.

Chris was known for his passion for classic cars, music from the 1950’s, and old television shows. During his retirement years, he was happiest at his and Sandy’s winter home outside Orlando, Florida, where he loved to frequent Disney World and the surrounding attractions. Throughout his life, Chris enjoyed a large circle of friends and family— which expanded in 2013 to include his daughter-in-law, Steffi (Kowalski), and in 2017, his granddaughter, Elvie Mathilda.

The family would like to thank Faith Hospice, as well as Pastor Ben Phebus of Blythefield Hills Baptist Church, for their care and compassion during the final stages of Chris’s illness.

A memorial service will be celebrated at 2:00 pm on Thursday, June 18, at Blythefield Hills Baptist Church, 6727 Kuttshill Drive NE, Rockford, MI 49341. The service will be led by Pastor Ben and followed by a reception of desserts and drinks, generously provided by BHBC.

Receive notifications about information and event scheduling for Edward

We encourage you to share your most beloved memories of Edward here, so that the family and other loved ones can always see it. You can upload cherished photographs, or share your favorite stories, and can even comment on those shared by others.

Posted Jun 19, 2020 at 11:35pm
Wishing you peace to bring comfort, courage to face the days ahead and loving memories to forever hold in your hearts.

Posted Jun 18, 2020 at 07:42am
Our heartful condolences on the death of Chris. We are deeply saddened an our thoughts are with you.
We will always remember the days, we spent with him in Berlin.
Petra und Werner Kowalski

Es gibt nichts, was die Abwesenheit eines geliebten Menschen ersetzen kann. Je schöner und voller
die Erinnerung, desto härter die Trennung. Aber die Dankbarkeit schenkt in der Trauer eine stille Freude. Man trägt
das vergangene Schöne wie ein kostbares Geschenk in sich.
There is nothing, that can replace the absence of a loved one. The more beautiful and full the memory, the harder
the separation. But the gratitude give a silent joy in sorrow. One carries the past beauty like a precious gift in itself.
Dietrich Bonhoeffer
Comment Share
Share via:
CW

Posted Jun 17, 2020 at 09:19am
Sandy and family -- Judy and I send our most heartfelt condolences to you. I have such fond memories of Chris as my roommate at CMU. He was kind and supportive of all, and had such a great sense of humor. All this while he was fighting his own constant health battles. Hopefully your memories keep you and the boys strong during this difficult time. Chris was a great example of personal strength. Our thoughts and prayers are with you all. Craig & Judy Wilkins
Comment Share
Share via:
DT

Posted Jun 16, 2020 at 09:26am
Sincere condolences to you, Sandy, and your family. Chris beat so many odds to have a wonderful life. You will be in our thoughts and prayers. Love and Light to you!
Chuck and Suzann Petersen
Comment Share
Share via: 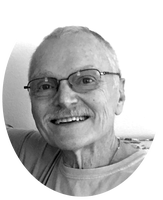