To share your memory on the wall of David Holkeboer, sign in using one of the following options:

Provide comfort for the family of David Holkeboer with a meaningful gesture of sympathy.

He is survived by his wife, LoAnn (Annie); children, Meike (Joel), Jack and Julie.
He is preceded in death by his son, Rand; sister Jean... Read More
David Neal Holkeboer, age 78, died July 29th, after a lengthy illness in Rockford, Michigan.

He is survived by his wife, LoAnn (Annie); children, Meike (Joel), Jack and Julie.
He is preceded in death by his son, Rand; sister Jean and brother-in-law, Judd Mereness.

David was always enthusiastic, adventuresome and hard working. He loved music and played cello in the Grand Rapids Symphony. He attended Calvin College and the University of Toronto where he studied under Marshall. After college, David taught English in Taiwan for two years and learned Mandarin while he was there. While teaching at Grand Rapids Community College he traveled the world. David had many rental buildings, and learned plumbing, electrical, heating and rebuilt many houses.

David will be missed by many friends and family and former colleagues.

Plant a Tree in Memory of David
Plant a tree 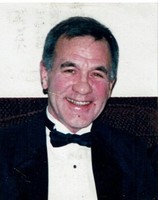