To share your memory on the wall of Benjamin Wilson, sign in using one of the following options:

Benjamin was born on June 25th, 1965, in Hayti, Missouri to Harold Wilson and Bobbie Bergman Miller.

Benjamin was born on June 25th, 1965, in Hayti, Missouri to Harold Wilson and Bobbie Bergman Miller.

Ben was a bad boy. Lets be real, we all know it. He loved to have fun! Ben liked to go fishing with his nephews Joshua and Nicholas Wilson. The best is when he fished with his grandson Angel. Ben had a love for wrestling.

As for work, Ben was with Villicana Tree Service for 20 years off and on. He was talented in many things like carpentry, and electrical just to name a few. The thing Ben loved to do the most was being around family. He said that his brothers LeRoy and James couldn't watch their grandchildren grow up, so Ben would. Unfortunately, his time was cut short but he made the most of what he had.

"My Ben, I will love you forever and always" ~ Michele

Arrangements have been entrusted to Simply Cremations in Grand Rapids, Michigan.
Read Less

Receive notifications about information and event scheduling for Benjamin

We encourage you to share your most beloved memories of Benjamin here, so that the family and other loved ones can always see it. You can upload cherished photographs, or share your favorite stories, and can even comment on those shared by others.

Plant a Tree in Memory of Benjamin
Plant a tree 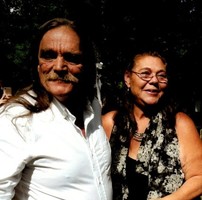