To share your memory on the wall of Antonio E. Leal, sign in using one of the following options:

Provide comfort for the family by sending flowers or planting a tree in memory of Antonio E. Leal

Provide comfort for the family by sending flowers or planting a tree in memory of Antonio E. Leal

Print
Antonio E. Leal, of Holland, Michigan, passed away at his home surrounded by his loving family. He was preceded in death by his beloved wife, Guadalupe, of almost 60 years.

A veteran of the Texas National Guard, Tony proudly served his c... Read More
Antonio E. Leal, of Holland, Michigan, passed away at his home surrounded by his loving family. He was preceded in death by his beloved wife, Guadalupe, of almost 60 years.

A veteran of the Texas National Guard, Tony proudly served his country for 9 years. Later, after moving to Michigan, he made his living as a cross country truck driver. He worked for Steelcase for 25 years, until his retirement, a job in which he took immense pride.

Tony was an extraordinarily beloved man by all who knew him. He was a charming and charismatic character with a wonderful sense of humor. He was gentle with his advice and generous with those around him in need. He was a dependable friend and brother, a loving uncle, a devoted husband, and a doting grandfather. To his children, Tony will always be, a treasured example of unconditional love, gentle unwavering patience, and genuine kindness.

Left to cherish his memory are his daughters: Sylvia Leal of Holland; Monica Leal and husband Bryan Wright of St. Louis, MO; Dahlia Danchak and wife Natasha of Forest City, PA; and son, Isaias Leal and his wife Penny of Holland. Grandchildren: Antonio, Isaias Zachary, Derek, Nikolas, Alyssa, Delfina, Alicia and Abigail. He also had 9 Great Grandchildren and many nephews and nieces. Antonio is also survived by brother, Armando Leal and his wife, Angelina, of Weslaco, Texas. He was preceded in death by his youngest brother, Jose Luis Leal, formerly of Weslaco, Texas.
Read Less

We encourage you to share your most beloved memories of Antonio E. Leal here, so that the family and other loved ones can always see it. You can upload cherished photographs, or share your favorite stories, and can even comment on those shared by others.

Flowers were purchased for the family of Antonio E. Leal.

Posted May 28, 2021 at 02:09pm
There not any favorite memories I have, mine was anyday beening with my old man. Time i love with him, is all the fun laughs and smiles i have with him. He was a good man. I love him forever. Good memory I have was be able to sing him a Selena song to him Dreaming of you. I love him so much, good times with my cousin Alyssa Leal in some good summers. So much I will have in my heart. Until i see you again my papa. -Delfina Leal
Comment Share
Share via: 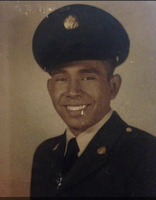